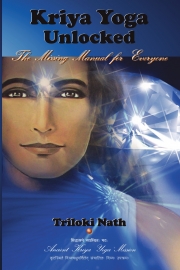 The Missing Manual for Everyone

This is a Kriya Yoga book intended to be read and practiced by everyone, with/without initiation.

Every word uttered by a Yogi has a special meaning that is totally unintelligible to even the highly intellectual people.

This book is written in such a way that everyone can follow it up while trading the path of Kriya.

People think that they are very intelligent, but if they try to understand very seriously, they realize perfectly that nothing is happening according to their intellect.

Only those whose breath is not blowing in the left or right nostril are intelligent in this world.

When breathing is faster, then in one day and one night respiration can flow up to 113,680 times. Normally during the same time, the figure is 21,600 times. During a day and night, if respiration is faster than usual, the breath can flow in and out 113,680 times. Normally, in the course of a day and night, there are 21,600 breaths. This figure is reduced by Kriya practice to 2,000 times. So, breathing 1,000 times in the day and 1,000 times in the night, in a normal course, provides greater Tranquility to a Yogi. One of his breaths takes about 44 seconds. Such a Yogi is matured in Kriya practice.

Thoughts are inseparably related to breathing. So, when the number of breaths is reduced, thoughts are reduced proportionately. Eventually, with the tranquilization of breath, thoughts are dissolved. Thereby, the seeker can attain the After-effect-poise of Kriya, or eternal Tranquility, which is Amrita, nectar proper.

Who am I? I am I - Ultimate Existential Reality Answer; Vedanta; God and Science conversation by Ravi S. Iyer

The Essence of All Religion (In Portuguese) by Dada Bhagwan

Notes to My Self by Shivani Shrivastav

अनावरन by Joy Thomas
Reviews of "Kriya Yoga Unlocked"
No Reviews Yet! Write the first one!
Please register or login to write a review.