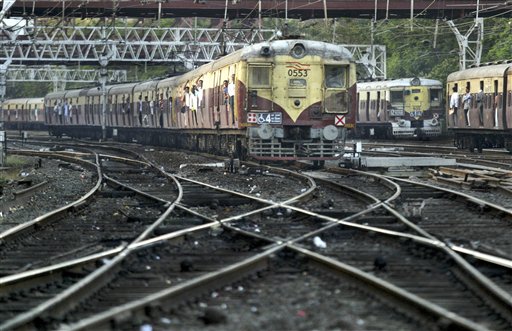 The brown-and-yellow steel snake slithered to a screechy stop at the Churchgate dock. Madhuri Phatke stood taut-poised, flawlessly aligned with the ladies second-class compartment at the marked spot on Platform 1. She was surrounded by a similar dozen or more testosterone-pumped toads ready for the gravity-defying sprint that belied their vada-pau-distended amorphous bodies. These willing victims with their starched-sari-covered, hirsute legs slightly apart and kohl-lined, vigilant eyes assessing the competition, strapped their Rexine bags firmly above the ribs, flaring gold-studded nostrils and croaking with the anticipation of their imminent fate in the mass-consuming reptile before them.

Twenty-three years of an unyielding routine incarcerated by the vile moor of time had ensured many things for Madhuri Phatke. 5:40 a.m. ensured that the provisional trickle of water broke its way into her reveries, making her dash into the bathroom to secure the three plastic buckets full, crutches for an otherwise handicapped survival through the day. 6 a.m. would ensure that, ablutions executed, she chopped and sweated in the kitchen-cum-living-and-dining-room packing five lunchboxes of homemade succour for her hormone-deficient husband, hormone-affluent children and her hormone-mystified self. 6:45 a.m. ensured that she swathed herself with yards of modesty from her exclusive selection of five saris, one for each working day, and donned a round red bindi, harmonized with the lines of custom, thus immortalizing her conjugality in a featureless sea of victimized potentials. 6:55 a.m. ensured that she awakened her family and bowed her head before that spot where all dust, dirt, newspaper mats, browned magnolias, agarbati scents, old coins and God statues stood communally. At 7:14 a.m. she boarded the station-bound rosy bus numbered 335 and at 7:43 a.m. she was on the Churchgate-bound fast local, to ensure her arrival at the Nariman Point office at precisely 9:00 a.m. Secretarial duties done, the 18:54 Borivali-bound fast local ensured that Madhuri Phatke stood at that very point at that very platform waiting for that very train in order to be swallowed, embalmed and spit out for an inch-by-inch journey back to the 445-square-foot corral where her duty resided.

The train was truly a vestige of the melting pot syndrome. Upon the bared steel floor boards the migrants carried forth the ashes of their nomadic meandering, scattering them with reverence amid the overflowing humanity. With the ancestral palettes of the cold-blooded, the blue-blooded and the hot-blooded, a smattering of hues painted itself on those yellow-brown seats. The sweat of labour cleansed with sincerity those clanging, glistening rows of belled handle-chains while black fans showered blessings of black dust on the numberless heads bowed under the shadows of their apathetic creator. These devotees’ troubled prayers lay prophesized by a plethora of writings on the wall like Rai Piles, Sex and Health clinics or U.S. English Speak or Lux Cozi skin-friendly vests or full body magic finger massage.

And it was here, from 7:43 to 8:35 and 18:54 to 19:55, that, for the last twenty-three years, Madhuri Phatke’s entire life was lived. What the alien viewed as a rigorous, dangerous and courageous journey constituted the only lifestyle that Madhuri Phatke, along with two million trainizens, knew in Mumbai. Her fellow travellers were the only clique she was truly integrated into. The push, the shove, the acceleration of boarding and departing, the hurried run across forbidden tracks, these were the only gym-cum-sauna workouts she had.

Entertainment was provided by the baritone-voiced brother-sister duo making music emanate from two stones while performing cartwheels for impoverished gratuities. The influx of desperate, pregnant salesgirls laden with infants and cheap plastic bands was a constant aide mémoire of the irrelevance of one’s own personal mistakes. A day of obscurity with the South Mumbai elite was annulled as she refused alms to yet another legless, timorous beggar breast-stroking his way along the grimy floor like a grimier rag. Sellers of homemade cakes, snacks and various assortments were a reminder of the self-sustaining entrepreneurial spirit of Mumbai. Her third-eye had developed a radar to arrest meandering hawks and gawks and clutches and letches. Poignant lyrics about love and life sung implausibly by Naina, her fellow trainizen, against a backdrop of electronic toning composed into the only music she heard. And, oh, those games of antakshri and rummy reminded her of her fun, egoless childhood that created the only laughter she cried to.

As Madhuri Phatke floated with the laissez-faire torque of the throbbing crowd bursting its way into the compartment, she wrung herself free and, with light feet, turned left into the aisle that led to her favourite seat 31B by the back window. It was the only seat she had ever called her own. As the snake hissed to a start, Madhuri Phatke deposited her bag to her left and dished out her customary lacy cotton handkerchief to dab at her perspiring forehead. She then noticed that Naina the vocalist was missing. A novel event she almost fretfully commented on when, amidst the brimming salvo of titters and gripes, a panting Naina interloped, hauling a lit cake. The veterans burst into claps and loud calls while tears welled up in Madhuri Phatke’s eyes. It was a farewell cake—Madhuri Phatke’s favourite chocolate one, too! Today was the last of Madhuri Phatke’s local train sojourns.

Two weeks ago, on the traverse back home, her left eye had come in the way of a stone hurled by some invisible from the peripheral slums. It had left her with a forlorn eye and an onerous medical bill. Worse still, her angst-ridden husband had arranged a job for her near their residence. She had protested because walking to work would put an end to her only source of joy, her daily catharsis, her place under the sun, which was home as it truly belonged to her—her 31B. Her house belonged to a familial duty, her office belonged to a financial duty and this world belonged to a spiritual duty. But her 31B belonged to no one, just as she didn’t belong anywhere—and in this lay their symbiotic fidelity. They belonged to each other. On that chipped, metallic, grimy seat she placed her weary soul like a detached spectator astride a golden throne. Madhuri Phatke’s middle class existence disabled her from accessing the vacuous melodrama of the privileged or the ominous melodrama of the poor. Akin to her acceptance of a common life, she stoically accepted her uncommon fate, knowing by the truth of things that lay within these trains—this lifeline of Mumbai—that she could have experienced much worse.

Mouths filled with cake and farewells bid with empty promises, Madhuri Phatke’s clique disembarked, leaving her and her cherished companion alone in their last lap to her final halt. Besmirched grills were now installed at the train windows after her lost eye made tabloid headlines. It irritated her that the stone that took her eyes also led to an outrage of people’s intrinsic blindness, which had now diminished the limitless wind that used to waft away her drudgery through these windows. Overwhelmed with grief, she abdicated her throne to an undiscerning public and perched herself at the edge of that gateless, guardless exit space on the train, to get a last chugging breath of life in this humid island of people. As the mendacity of Mumbai—shouting opulence from aesthetic skyrises to a putrefying slum below— zoomed past, she had eyes only for her 31B. Madhuri Phatke could never be the same again.

She had thirty seconds till her stop arrived. In a sheer moment of madness, she did what she had dared not to do in twenty-three years of travel. She leaned her body out of the speeding train, as she had seen so many before her do, and felt the sweet freedom of having her hair blown by the wind, her face tingling with the blast, her mind free of wanton thoughts, her soul free at last. She felt like a green leaf dancing in the evening wind in anticipation of the morning dew. She lecherously focused her one good eye on her constant companion and yelled promiscuously into the wind her parting words: "I love you!"

Delirious with redemption, Madhuri Phatke began pulling herself back in when a speeding train on the blind-spotted opposite track struck her outstretched arm, shredding her unbalanced body into tiny pieces within a matter of milliseconds.

31B sat there mutinously—quiescent, phlegmatic, engaged.

I am an Indian business journalist and freelance writer currently based in New York City. I write regularly about Indian American life for magazines across the trans-Atlantic. My nonfiction articles have appeared in publications including Little India, The South Asian Times, MiD Day, Man’s World and Hindustan Times. I am currently working on my first novel, One-And-A-Half Wife, which was selected a Top Ten Finalist in WordHustler's Literary Storm Novel Contest. My short story 'Lemon & Chili' was recently published in EGO Magazine.

Hi Meghna,
I loved your story.
It is so effective because of the authenticity.
Brought back memories of my Mumbai days.
Keep writing such wonderful fiction.
Regards
Vikram
http://vikramkarve.sulekha.com
http://karvediat.blogspot.com
vikramkarve@sify.com
vikramkarve@gmail.com

It was a nice read especially since we were in Mumbai (for the first time!) just couple of weeks back. And ya, to get the train experience we took the Churchgate to Boriville fast train! Talk about co-incidence. :)

Found the story quite intense and very, very descriptive. Sentences were quite loaded and needed a second read for me to get the meaning. Also, I had to refer to the dictionary many times and I think my vocabulary is has improved now. :) Ending was done well...appropriate for how it flowed, I suppose.