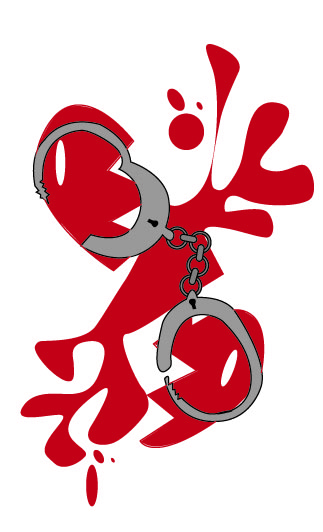 Gyanandra Chowdary started young. He joined the People's Protection Party when he was still in Standard IX. In the initial stages, he passed on information from one base to another, working as an overground agent. Gradually, he neglected his studies and became a proper underground. Going from a mere foot soldier to a lieutenant commanding a specific area at the age of 23 was not easy, he would tell his trusted friends. As a lieutenant, well, almost, he had made his presence felt in the underground community. A few minutes ago he had performed his ultimate duty on his way to becoming a lieutenant. He had deposited two bullets at point blank range inside the skull of a police informer as a punishment to him in particular and as a warning to the public in general.

Gyanandra, the broad-shouldered, slightly built young man in a checked cream-coloured shirt and blue jeans, felt something in his heart that he had never felt before. His square, clean-shaven face showed no emotion but his brown eyes darted left and right. Every single nerve of his body was stiff. What he had just performed was an act of eternity. There was no going back after this, he knew, but he was not prepared for the reaction of his nerves.

Things changed immediately. The empty road seemed to speak to him in a thunderous manner. The trees on both sides of the road moved towards him in huge imaginary waves. The sky was blue but he saw the white stars everywhere. Far away on the horizon, the mountains looked down at him with their commanding presence. He wiped the blood from his hands on the grass. The informer’s body lay on the grass with the upper part of the head smashed. A pool of black blood surrounded the body. Gyanandra felt that he had become somebody. Now he wanted to confess everything to Anita. He felt a strong urge to tell her as soon as he could.

Suresh Singh, his mentor, kick-started the bike and told him to sit behind him. Gyanandra did as told. As a rule, anyone who was making his mark for the first time would be accompanied by his mentor. Suresh was a 38-year-old veteran revolutionist who looked younger because of his lean physique. His tight black t-shirt accentuated his muscles. His sharp eyes had dark circles under them. A deep scar ran across his left cheek—it was believed that an inspector had given it him during interrogation. Gyanandra was his find.

“We have to reach base camp before night,” Suresh said.

Gyanandra leaned closer and tried to filter the words from the buzzing of the bike.

“Do not think about it now. It’s over. It’s not you who killed him. It was his doing. You didn't take a precious life. You punished a dangerous informer and thus helped the cause of our revolution.”

Gyanandra listened without uttering a word.

As they approached the end of the highway, they saw a police checkpoint. There was a barricade in the middle of the road. The police was checking all vehicles coming into the city from the highway.

“Throw away the gun. Be as normal as you can. They must have got the information about his death.”

Suresh slowed down his bike. “Stick to the protocol. Remember our rehearsal this morning? Good. You must answer the same.”

Gyanandra threw away his gun. It fell inside the drain by the side of the road. As they came near the barricade, a policeman signalled at them to stop by waving his hand. Suresh stopped the bike.

There were five more people who were being stopped by the police. They were all interrogated separately. The man frisking Gyanandra was a tough-looking hawaldar around his own age.

Gyanandra replied to all the questions put to him exactly the same way he had answered the instructor at the base camp this morning. It was a perfect protocol. Gyanandra noticed a peculiar thing about himself: he was unusually calm. The police seemed satisfied with the answers. Finally, the hawaldar checked Gyanandra's wallet. He took out a folded paper from the wallet.

“What’s this? Party document?” he asked as a surprise tactic. It didn't affect Gyanandra.

“No, sir, it's a love letter. I haven't even read it,” Gyanandra replied, without any change of tone. It was not part of their protocol, but he had nothing worry about since it was indeed a love letter from his Anita. She had given it to him last night. He had put it inside his wallet to read it after doing his important duty.

The change of expression on the hawaldar’s face surprised him. The hawaldar took a step back and aimed his automatic rifle at Gyanandra. He shouted at him to put his hands up in the air. Seeing this, the other policeman who was with Suresh did the same.

“You are under arrest,” the hawaldar said. Another policeman came and stood beside him. He took the love letter and read it aloud in a mocking voice:

I always thought it was a rumour when people told me about you. But I stumbled onto something in your room two days ago that confirmed it. You have joined the People's Protection Group. Our relationship is over. I cannot be with someone who is an underground.

Forever, but not yours,
Anita”

Did not expect it. I guess, one better read the "love letters" before keeping them in their purses... :)